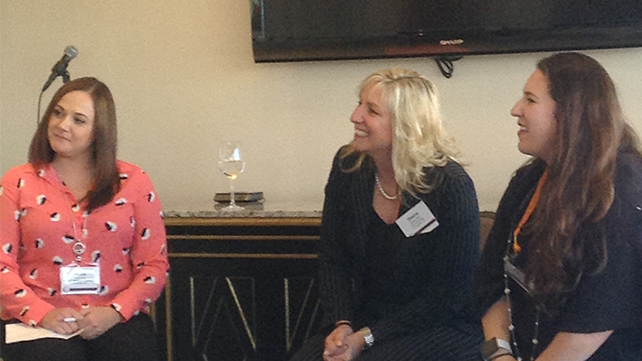 Sunday, March 8th, was International Women’s Day, a day celebrating the achievements of women while pushing for a collective effort to create greater equality. Recently, the ladies of National Merchants Association gathered in San Diego, California for the first Women Networking in Electronic Transactions (W.net) event of the year.

W.net, an organization founded as the premier professional organization for women in payments, is a platform for the women in the electronic transactions industry to gather, mentor one another, and influence the industry.

The view from the 34th floor of Symphony Towers in San Diego, CA.

A lively round of Networking Bingo ensued, along with a “fireside chat” led by Alexis King, Director of Sales Support at National Merchants Association, that featured Deana Rich and Carol Grunberg, Head of Payments Partnerships at Google, and one of the Board of Directors at W.net.

One of the most talked about topics was the statistic that only 13% of the payments industry is comprised of women, a daunting fact.

“The focus this year is ‘Women Driving Payments’,” Grunberg revealed to the chapter.

The attendees, with all levels of payments experience, contributed to a question and answer session with the speakers that covered topics such as gender equality within the industry, branding one’s self, and leaning on the members of W.net for advice, support, and guidance.

“I love that I have a space to connect with other women like myself,” says Kandace Carrasco, new member of W.net. “Especially because this industry is extremely male dominated.”

So on the upcoming International Women’s Day, the ladies of National Merchants Association, and the Southern California chapter of W.net, will celebrate the fantastic success that women have experienced in the industry, and look forward to the future endeavors that lead to women driving payments.

October is an incredibly busy month for National Merchants Association. Within the…

Need a Merchant Account for Your Vape Store? DONE.

In the world of electronic cigarettes, vaporizers, and other cigarette alternatives, merchantA…

National Merchants Association is Now an Available Processor on NMI