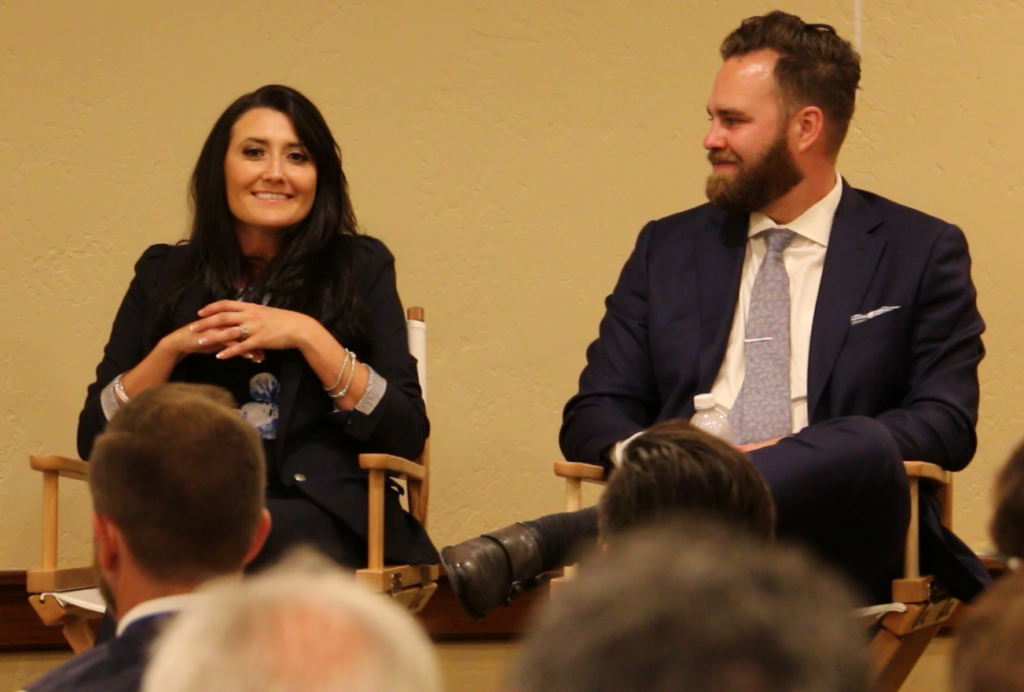 The event — titled “Fire” for high-risk and “Ice” for low-risk — was designed to create networking, recruitment and educational opportunities, and most importantly, to preview and showcase NMA’s brand-new, game-changing product launches.

Agents from near and far arrived in Temecula on the night of Oct. 9 and the following morning, then enjoyed a day on the golf course, followed by networking with NMA executives at a cocktail gathering and sit down dinner.

But it was on Oct. 11 that the show really started and it was launched by NMA’s fearless leader, Chief Executive Officer and Founder, Heather Petersen.

“National Merchants Association has achieved incredible growth and prestige since we opened our doors in 2004,” Petersen said. “We couldn’t have hit these amazing milestones and won these awards without the collaboration of our agents and partners.

“On that note, I’m thrilled to announce we’ve prepared the largest product launch since National Merchants Association was founded — and I promise, we’re only getting started.”

Agents then split up into two groups, low and high risk, to hear educational presentations and participate in question and answer sessions with NMA’s top executives.

After lunch, Ed Bowling, Director of Systems Administration for NMA, took to the main stage to announce the company’s brand-new Chargeback Control Platform (CCP), which he described as “chargeback interception that’s unprecedented.”

“CCP is one of the most exciting products we’ve ever created, and we’re ecstatic to unveil it here at Fire & Ice,” Bowling said.

CCP will offer automatic issue refunds on three levels, the third being an exclusive feature to NMA. On the third attempt, CCP will automatically issue processor level refunds.

“This product will completely change the way disputes, chargebacks, and high-risk merchant accounts are serviced and maintained,” Bowling said.

Then it was NMA Vice President of Sales Brian Berkenbile’s turn to take the stage and he first focused on the global merchant advocacy group’s Membership Programs.

“High Risk agents need to control chargebacks and manage risk. Low Risk agents need value-add tools and services to offer their merchants to help them grow their businesses,” Berkenbile told the crowd. “And as of today, our Membership Program provides both.”

After a short break, Berkenbile came back to the stage for another ground-breaking announcement. Referring to the dozens of boxes on the stage and on tables in front of the agents, he said, “Inside this box is a revolutionary program that will change agent programs forever.

“Inside this box is something that gives agents all over the globe the tools, the training, the support and — most importantly — the freedom you need to dominate your market.”

He then began previewing the much-anticipated TransAction Plan, which he said will allow almost anyone the ability to become an agent overnight, while “instantaneously and immensely raising the level of support and flexibility longtime agents have come to expect from NMA.”

The multifaceted program provides the power of NMA’s multi-million-dollar marketing program, a proven learning management system and sales team-building tool, the proprietary ProAgent Portal and as well as up to four, pre-set and twice-confirmed appointments every, single, day — for each agent, within their assigned territory.

“This program will make you — not only the best in your market — but the best in this industry,” Berkenbile said.

After another short break, it was Berkenbile up on the stage again, this time, to close out the full day of presentations and product launches.

“Did you realize that you are part of a group that represents more than 3,000 merchants and half a billion dollars in processing transactions this year alone,” Berkenbile said. “Those are big numbers, and getting bigger all the time. But those numbers represent so much more.”

He told the crowd about National Merchants Association’s advocacy, which is at the heart of what the company is about.

“We are committed to the fight — and our focus in that fight is advocacy,” Berkenbile said. “Putting advocacy first is why you find Heather (Petersen, CEO) quoted regularly in the media. It’s why you find her giving key note speeches at trade shows. It’s why she serves as a policy maker with ETA and why you see her on Capitol Hill educating lawmakers and helping shape policy.”

National Merchants Association has backed up that commitment to advocacy with a surge in new hires which has seen the company more than double its workforce since the end of 2015.

“Why are we hiring at a break-neck pace?” he said. “We are hiring them for you, We Work for You® is not just a tag line. We want to bring in more people — people who have great ideas, better ideas — which fosters even more growth — and even better results.”

That commitment to agents, merchants and the industry is what advocacy is all about, Berkenbile said.

“So, why choose NMA?” he asked. “Whether it is products, programs or policy. We simply won’t accept anything less — not for NMA, not for our merchants and not for you.”

Scheduled to be held in Las Vegas from January 5th – 8th,…